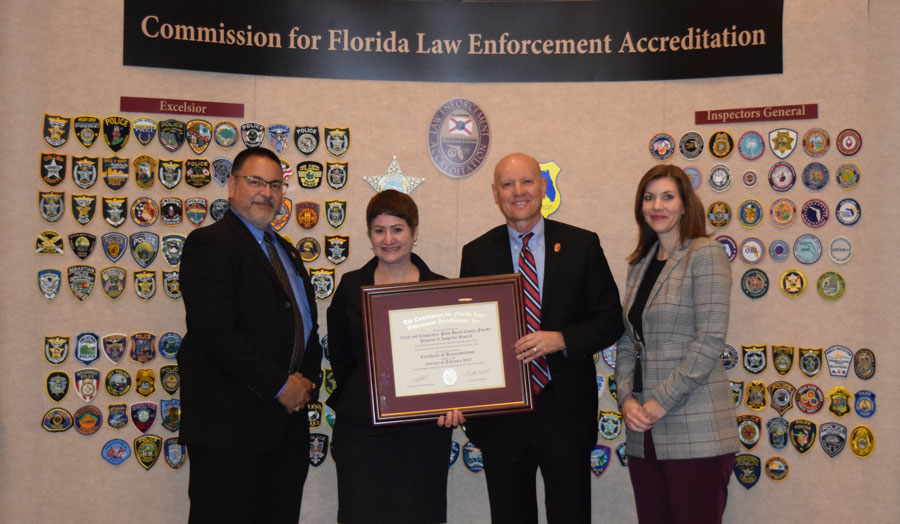 Established by charter of the Clerk & Comptroller and formerly called the Audit Services Division, the mission of the Division of Inspector General (IG) is to provide independent, objective auditing and investigative services designed to add value, improve the Clerk & Comptroller operations and preserve public trust. Led by an Inspector General appointed by the Clerk, the division strives to educate citizens and policy makers regarding the operation of government, while assisting in the administration of the Clerk's constitutional duties.

In February 2011, our IG office became the second Clerk's office in the state of Florida to be awarded status as an Accredited Office of Inspector General by the Commission for Florida Law Enforcement Accreditation (CFA). The CFA requires re-accreditation every three years.

Being an accredited agency signifies that our work product meets or exceeds the highest professional investigative standards promulgated for Offices of Inspector General. The benefits of accreditation include improved agency transparency, enhanced consistency and quality of investigations, well-defined procedures, improved accountability, and statewide recognition that our office has achieved its accreditation status.

Having an IG accredited team within the Clerk’s office supporting the Clerk’s constitutional role as financial auditor for Palm Beach County government provides another layer of protection for the public—ensuring your tax dollars and all county revenues are protected.

In September 2018, our office successfully completed a peer review of internal auditing practices. The Association of Inspectors General peer review team evaluated our office based upon The Institute of Internal Auditors’ (IIA) International Standards for the Professional Practice of Internal Auditing (Standards). We received an unqualified opinion, stating that we generally complied with the Standards, which is the highest opinion that may be given. Areas of distinction noted in the final report included the credentialed and well-trained staff, outstanding staff professionalism and proficiency, collaborative relationship with stakeholders, and audit work supporting the final audit reports that added value to the Clerk’s office. View the complete report.

The Division of Inspector General is comprised of two operational units, the Audit Services Unit and the Public Integrity Unit.

If you suspect a court-appointed guardian is misusing a ward’s finances, report it to the Guardianship Fraud Hotline. Submissions are sent directly to the Clerk & Comptroller's Division of Inspector General.

Free viewers are required for some of the attached documents.
They can be downloaded by clicking on the icons below.